The International Elephant Project (IEP) is a not-for-profit project for elephant conservation, rainforest protection and local community partnerships, in order to protect and save the entire ecosystem and biodiversity of habitats shared by elephants. Run by The Orangutan Project (TOP) Board, IEP was formed to conserve elephant’s entire ecosystem in a holistic manner.

The Orangutan Project was established in 1998 by founder and world-renowned orangutan expert, Leif Cocks, as a result of his 25+ year career working with orangutans - including establishing the most successful breeding colony of orangutans in the world. The Orangutan Project was formed with a key mission; to ensure that endangered wild orangutan species would be protected against extinction, and would continue to live in secure populations for generations to come.

Today, The Orangutan Project is a dynamic, fast-growing and successful not-for-profit organisation that supports a wide range of critical projects that address the holistic problem facing remaining fragmented orangutan populations - including fighting deforestation and habitat loss at the highest level.

The projects funded by The Orangutan Project not only include direct orangutan conservation, such as orangutan rescue, rehabilitation and release programs, but also forest habitat protection and regeneration, education, research and local community partnerships. Tying funding into direct outcomes for the species has enabled The Orangutan Project to partner with the majority of orangutan conservation projects operating on the ground today in Borneo and Sumatra.

This has greatly increased overall efficiency and transparency in saving the species as a whole, bringing together the key players and groups who are working tirelessly on the ground to ensure the species’ survival.

The long-term growth and sustainability of The Orangutan Project has been made possible only by the loyal support of our individual donors, many of whom have supported the organisation each year since inception.

Through orangutan ‘adoptions’, regular donations and critical appeals, the organisation has been able to achieve more for the species than any other orangutan conservation group. The ongoing support from our individual donors is imperative for the organisation to reach our goal of increasing the number of wild orangutans under The Orangutan Project’s permanent protection to 8,000, to ensure sufficient numbers of each orangutan species/subspecies survive indefinitely.

That all elephants live in the wild in secure and viable populations.

To promote the survival of all elephant species in their natural habitat by undertaking genuine, measurable and effective elephant conservation.

Since its formation in 1998, The Orangutan Project has contributed more than $14,000,000 directly into orangutan conservation projects and has earned a reputation amongst its partners and donors for being financially responsible and transparent.

We are committed to making sure your donations work as hard as possible. We don’t have an office - each member of our team works from their own home, using their own electricity, internet and infrastructure. This helps keep our overheads amongst the very lowest in the sector, and ensures as much of your donation as possible goes straight to where it’s needed most.

We are also working hard to increase and secure our future income streams. Our big goal is to raise $20 million dollarsevery year because we know that’s the only way we can secure the long term survival of all orangutan sub-species, and safeguard their jungle habitat. And we will achieve this, with your help! 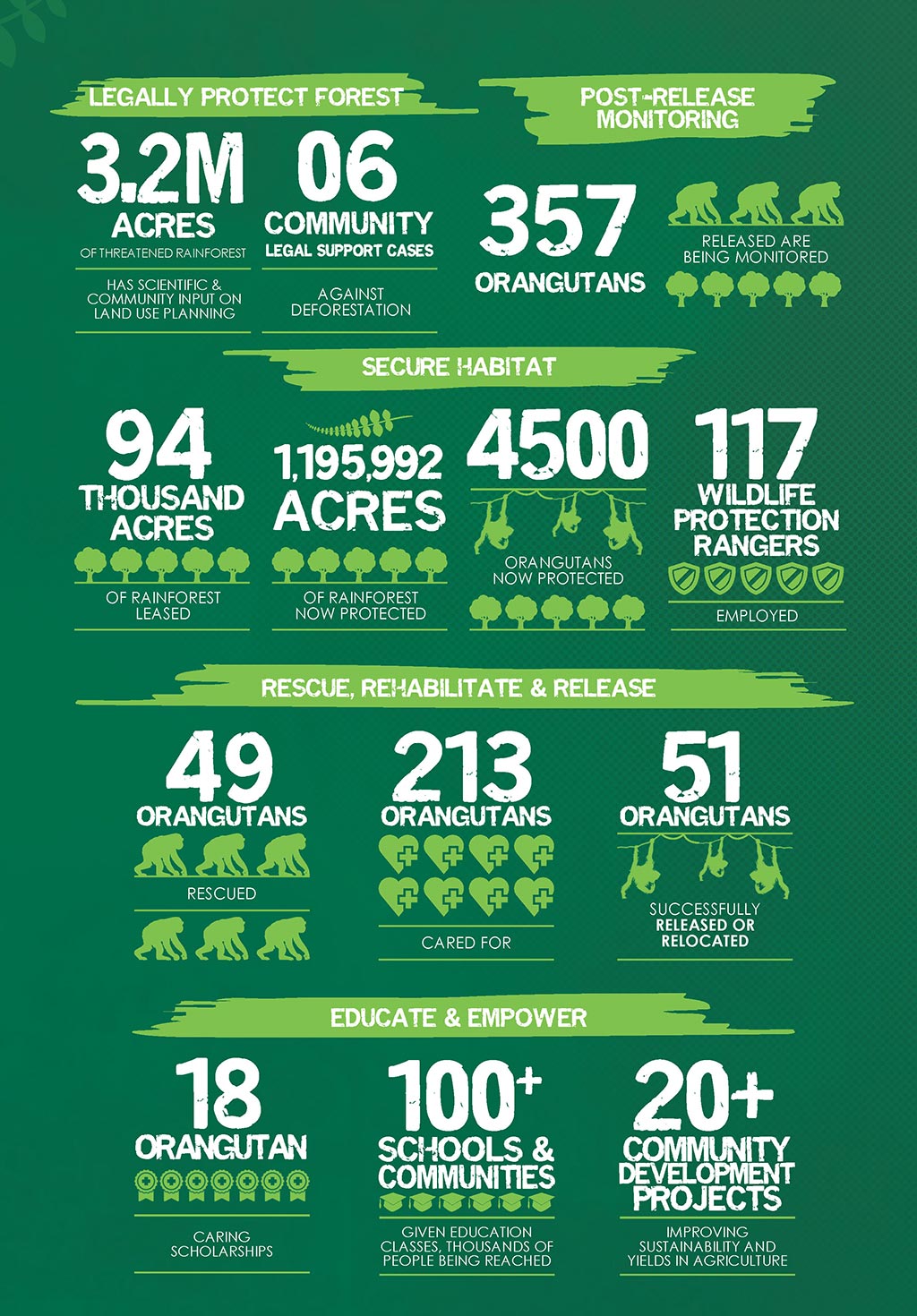 For more information about our achievements, fundraising and distributions of funds visit our latest annual report.

The Orangutan Project comissions an independent accounting firm to audit our organisation each year. The audit information is submitted to the Australian Charities and Not-for-profits Commission (ACNC) and other regional authorities where required.

For our most recent financial year (2019-2020) The Orangutan Project commissioned Walker Wayland to perform the audit.

Over the next ten years The Orangutan Project wants to increase the number of wild orangutans under permanent protection to 8,000 to ensure all distinct populations of orangutans survive indefinitely. This requires TOP to secure 450,000 acres of prime lowland forest and protect it with 180 Wildlife Protection Rangers.

This will require us to increase income to $20 million annually.

The Orangutan Project (TOP) is committed to social equity within all of our conservation projects and programs, and within our organisation. This is consistent with the essential characteristics of our organisation’s mission and concern for social justice and equity.

The Orangutan Project will at all times endeavour to:

The Orangutan Project will not discriminate based on a person’s: race, colour, national or ethnic origin, nationality, religion, sex or gender identity, sexual orientation, marital status, pregnancy, intellectual or physical impairment and disability.

The Orangutan Project complies with all relevant legislation in its pursuit of equal employment opportunities.

Everyone has a right to be safe at work, including volunteers. As so far is reasonably practicable, Wildlife Conservation International (WCI) will ensure the physical and mental health and safety at work of its volunteers, as required under the Work Health and Safety Act (WHS Act).

The objectives of the The Orangutan Project have many flow-on effects that both protect other critically endangered species, such as the Sumatran tiger, elephant and rhino, as well as indigenous communities and the remaining rainforest in Borneo and Sumatra.