Keep them Wild and Free

Your gift will help save the elephant 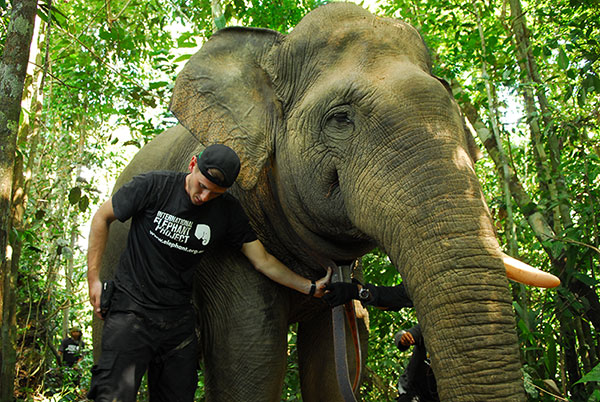 Elephants are highly intelligent and self-aware beings, therefore their needs can only be met when living in the wild in their natural family groups. This is the goal of the International Elephant Project.

The natural habitat of the Sumatran elephant is shrinking. As a consequence, the animals are helping themselves to the plantations cultivated where their forests used to be. This leads to conflict with locals and to dangerous situations, for both humans and the elephants. In 2009 the ECMU was set up as a conflict-reduction programme in Bukit Tigapuluh.

Donations enable us to fund the critical projects that focus on:

The massive loss of habitat has led to a situation where almost all the elephants are in constant conflict with the local population. In addition to the destruction of their habitat, with which it is closely related, this conflict, known internationally as the Human-Elephant Conflict (HEC) poses the greatest threat to the elephants of Sumatra.

As they wander, even elephants living in sufficiently-forested regions are increasingly coming across fields and plantations providing high densities of premium fodder in the smallest of areas – a veritable land of milk and honey from the elephant's perspective. It is no wonder that the animals are attracted to these plantations and have learned to meet at least some of their food needs from cultivated crops. Conflicts with landowners are inevitable.

The ECMU programme in Bukit Tigapuluh began reducing the conflict between the human population and the elephants about three years ago. This helps both the animals and the humans and is the only way to make peaceful coexistence possible.

Many farmers are helpless in the face of the problem represented by the elephants. The animals destroy crops and dwellings and consequently the livelihood of a community frequently living under the most austere of conditions. In rare cases, humans are injured or even killed by the elephants.

Almost no assistance is provided by the Indonesian authorities and the farmers are left to their fate. In the past, this helplessness has repeatedly led to the animals being injured or killed out of revenge or sheer desperation, often through the use of poison – a slow, torturous death.

Below: Alexander Moßbrucker talks about how and why he became involved with elephant conservation.

This is exactly where the ECMU steps in. We help farmers to minimise the damage to their fields and show them how to behave correctly in conflict situations in order to avoid danger and accidents with the elephants. With a mix of nature conservation measures and education, we want to develop a greater awareness of nature and wildlife which will make acceptance and coexistence possible in the future – the key to the survival of the Sumatran elephant and other species.

Deterrent techniques which are currently in use, developed in cooperation with the farmers, aim primarily at preventing the elephants encroaching into agricultural areas. Among other measures, special electric fences are used (like those familiar from pasture land, but up-sized for elephants), as are watch towers and simple alarm systems. When elephants are sighted near to fields, or when they have already encroached into the plantations, blank rifles and smoke bombs are used to drive the animals in the right direction.

As the people in the area have been involved in the project from the very beginning through village groups and community work, they will undoubtedly succeed in managing without outside help in the long term. In combination with effective conservation of the habitat, it will be possible to minimize conflict and, as a result, eliminate the main reason for killing the elephants.

Over the past three years, the troop has evolved into one of the best-trained elephant conservation units in Indonesia. The work is not easy; a lot is demanded of the ECMU rangers. The troop has to be flexible and able to work under the most varied of conditions, and is constantly on the road as elephants rarely stay in one place for long. The ECMU operations generally take place far from tarred roads which is why off-road motorbikes are used, taking the rangers quickly and safely to their destinations. On really difficult terrain, patrols and wildlife tracking assignments have to be undertaken on foot. Anyone intending to become an ECMU ranger needs to be able to welcome a sporting challenge. This is no place for paunches and lazy excuses!

Just as important as the physical fitness and technical expertise of the ranger are his social skills. At the end of the day, all the problems faced in nature conservation are caused by humans. That means only a change in how people think and act can lead to long-term success.

There is practically no wilderness free of human influence left in Asia. The survival of the Sumatran elephant is directly dependent on the acceptance of the local population. Almost all the ECMU rangers grew up in and around Bukit Tigpapuluh and are therefore thoroughly familiar with the area and the people. This familiarity with the region and the locals, coupled with their soundly-based training in nature conservation, allows the rangers to effectively tackle the current problems and constitutes the basis for long-term success. Young people like our rangers carry the nature conservation concept into the villages and are the basis for a new generation of Indonesians who believe in the coexistence of humans, nature and wildlife and are willing to work towards it.

Alexander Moßbrucker is head of the project aimed at minimising the conflict between elephants and humans which is part of our Bukit Tigapuluh programme in Sumatra.

What does an ECMU Ranger do?