Senamo is lucky to be alive, but without the skilled intervention of our partner Forum Konservasi Leuser (FKL), she might not be. The truth is that all Sumatran elephants are at risk every day of their lives. The only defence they have are our wildlife rangers – and you. Without wildlife rangers to remove and destroy snares, educate and engage with communities and farmers, and provide medical care and attention to injured animals, many more Sumatran elephants would die each year. There is a thin line between life and death for Sumatran elephants – that line is the width of a snare. Donate to save elephants from snares. 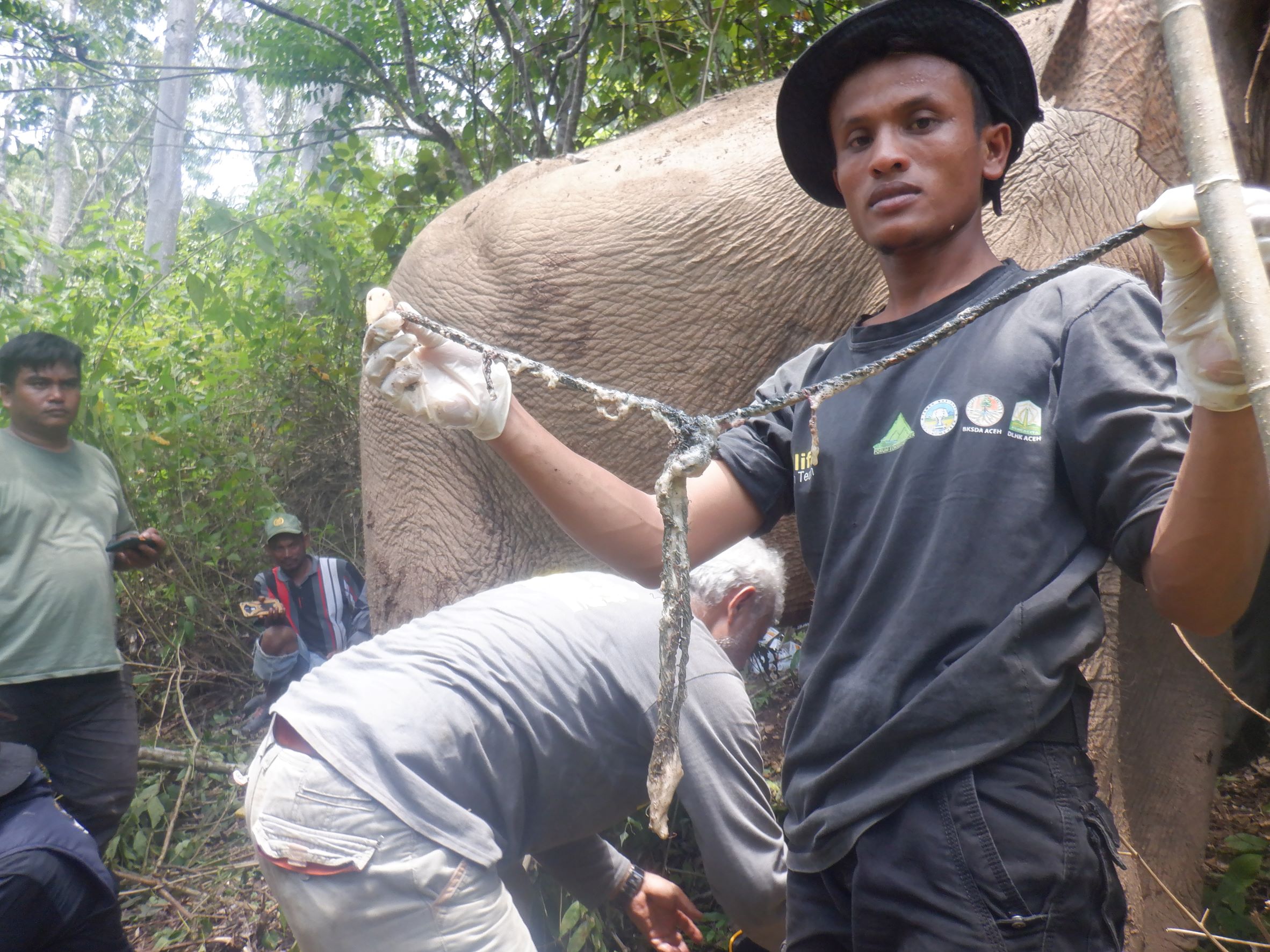 Earlier this year, thirty-year-old Senamo became trapped in a sling snare in the Leuser Ecosystem, but she managed to break the rope that was holding her in place. It’s hard to imagine the fear and agony she must have experienced as she desperately pulled on the snare, trying to free herself.

However, Senamo’s troubles didn’t end there. Although she was finally free and able to move around, the rope was still embedded in her foreleg. Over time, her foot became infected, and the wound had started to fester by the time she was rescued. If she hadn’t been rescued, she would have died from a combination of the infection and starvation.

It’s thanks to the local community, who saw her limping in the forest near their village, that Senamo is alive today. They informed FKL's Leuser Rescue Team that they’d seen her in the forest near the Bundun Indah Village in Aceh Tenggara in North Sumatra. Our partner FKL went to the area, along with the local authorities (BKSDA), to investigate and rescue Senamo. They were also disturbed to find nail traps and poisoned bananas in the area, a worrying sign of human-elephant conflict in this area.

FKL and the BKSDA medical team evacuated Senamo from the area in order to take a look at her wound. They quickly removed the snare from her right front leg, and the medical team treated her wound with anaesthetic, antibiotics and other medicines. 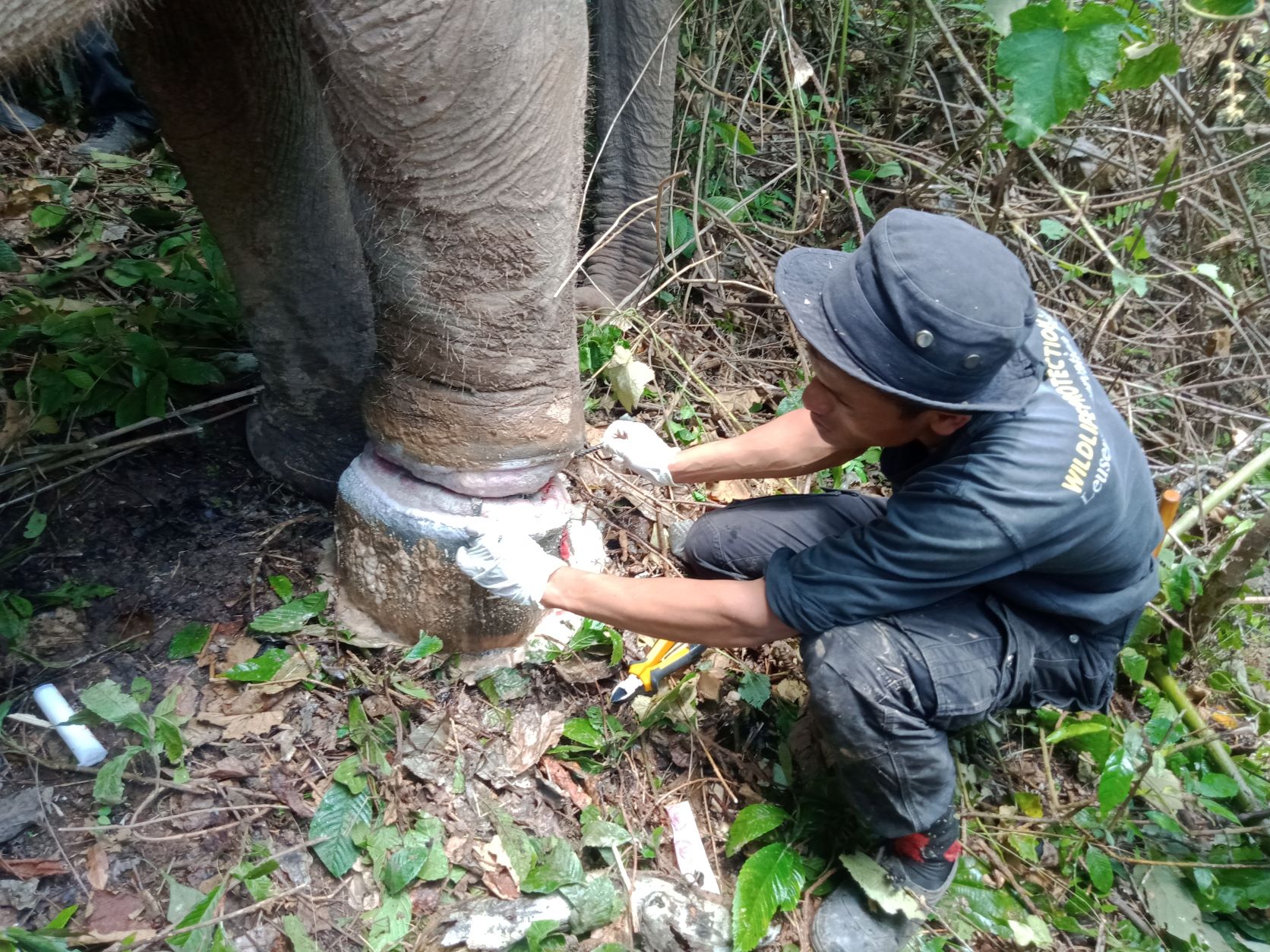 When the team found her, Senamo was quite weak, most likely from the infection in her system, as well as from a lack of food. When an elephant’s foot is injured, they find it hard to break large leaves and branches, which is a core part of their diet. The wound had also made it hard for her to move around through the forest and find other food types.

When Senamo regained consciousness after her treatment, the team was pleased that she ate voraciously as soon as she was able to move around. FKL believes Sneamo will recover faster in her habitat, but they still need to monitor her condition in the forest to ensure she continues to heal well. The wildlife rangers will be on hand nearby for a number of months in case she needs additional support or medical attention. You can be part of her recovery with a donation today. 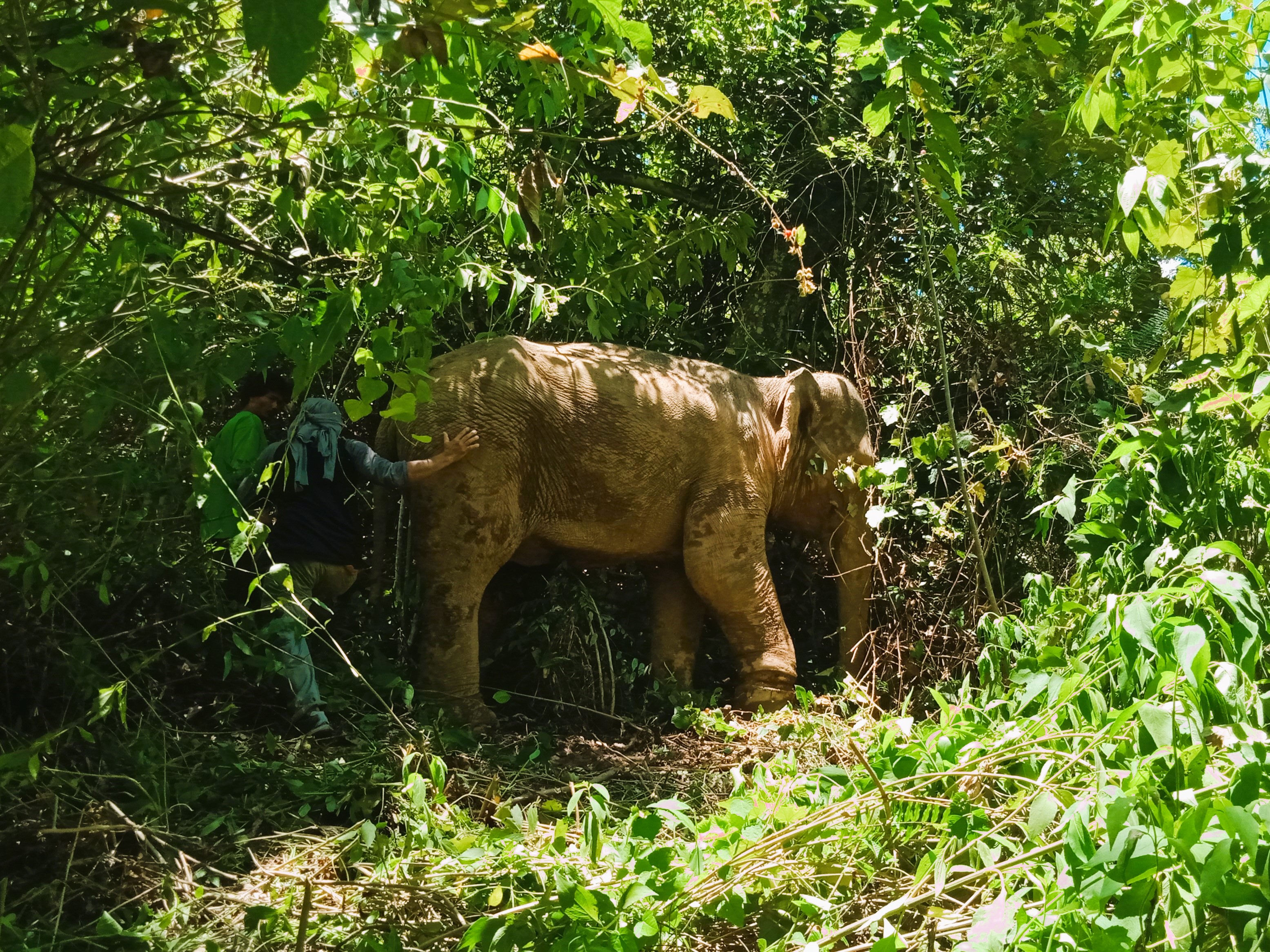 Due to being trapped and her injury, Senamo has also become isolated from her herd. Elephants do not live alone; they’re healthier, happier and safer when they’re roaming with their herds. The challenges and risks for Senamo are not over, and the wildlife rangers of FKL will keep an eye on her until she can join her herd.

Senamo owes her life to the community who reported her, our partner FKL and their skilled rangers, animal handlers and vets, as well as the local authorities. Many people with diverse skills and training are required to save just one elephant, and the job is still not done. FKL will continue to monitor Senamo for months, patrolling on foot and motorbike into the forest to ensure she’s recovering and eating well, and to ensure she is able to rejoin her herd. 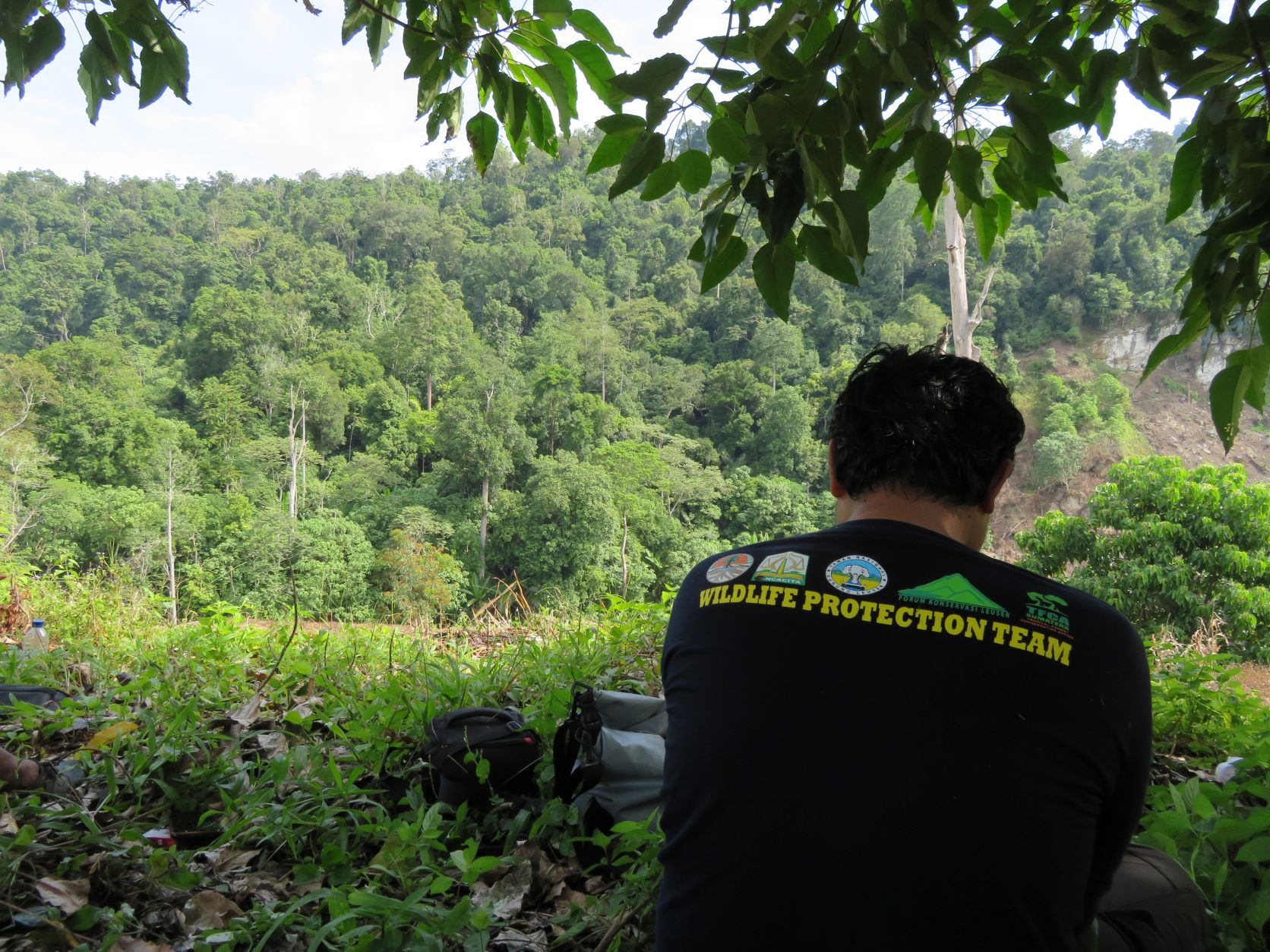 What is a snare?

Snares are simple, low-cost traps set by poachers to catch species like wild boar, deer or tigers. Made from materials such as rope, wire and string, they cost very little and require minimal skill to rig in the forest. They’re crude and cruel and our rangers are doing everything they can to remove and destroy them.

It’s hard to imagine just how damaging a small pile of wire or rope can be, but for Critically Endangered species, they are one of the main reasons Sumatran elephants are sliding into extinction. Poachers and hunters usually set these traps to catch animals for food, but the snares are indiscriminate. Elephants often become trapped when they step into the rope or wire hidden in the undergrowth.

The kind of snare Senamo stepped in was a sling snare. This is a simple contraption that involves tying rope, cord or wire to a young sapling. The tree is bent over and the snare is fixed into place. When an animal like Senamo steps into the loop of wire or rope hidden under leaves on the ground, the sapling springs up and the rope becomes tight around the animal’s foot. It’s a terrible way to die, and the panic and pain animals suffer while they’re lying there in the forest is insurmountable. Below you can see just a rope snare removed from the forest by rangers in Sumatra. 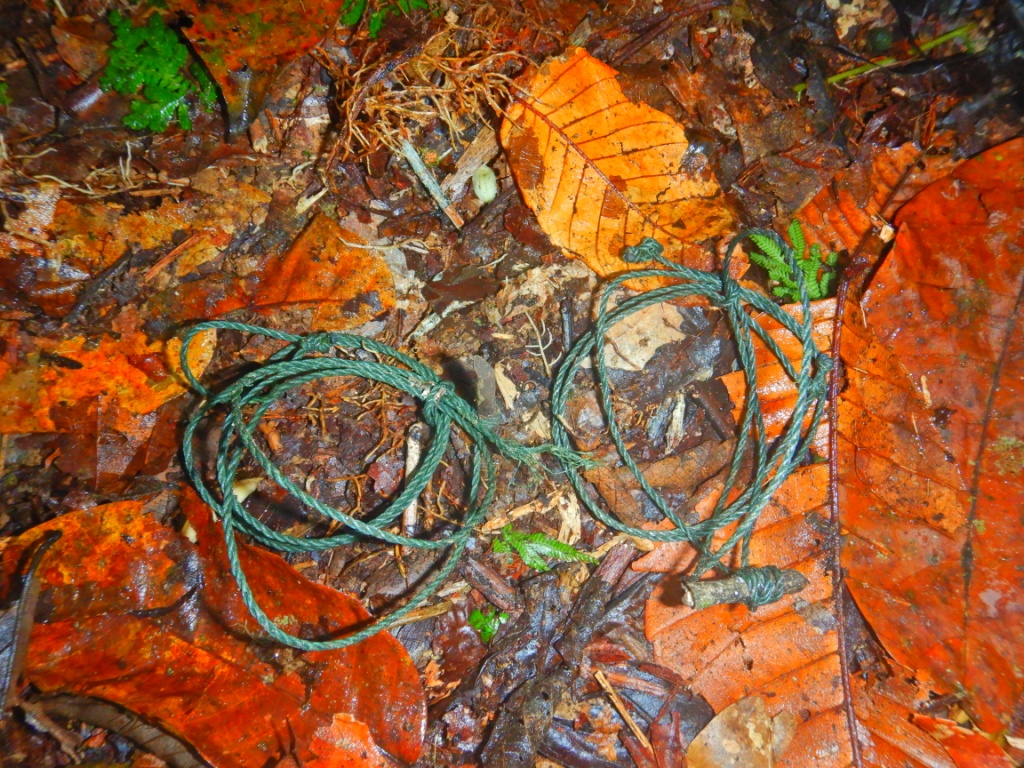 Our partner Forum Konservasi Leuser (FKL) plays a significant and crucial role in the forest, but the Leuser Ecosystem is vast. They simply can’t be everywhere at once. They build close relationships with local communities and local authorities to ensure they’re aware of animals in distress and that villagers are doing what they can to protect wildlife.

Since 2020, FKL has witnessed an increase in poaching and snares, with key wildlife being killed too often. To address this concerning situation, they’ve increased the number of veterinarians available for swift deployment into the Leuser Ecosystem. Since 2019, they’ve deployed a Leuser Rescue Team that consists of three veterinarians and elephant protection field staff to conduct rescue operations and prevent wildlife deaths, especially of the four key species of Leuser: elephants, tigers, orangutans and rhinos.

When an elephant is treated or rescued from a snare or there are two options for what happens next. They can either release the elephant back to the wild after injury treatment, which was the best decision for Senamo, or they can relocate the elephant to a rescue centre if the animal’s health is critical and they need further treatment. We rely on donations from supporters all over the world to pay for rangers to patrol the forest and for the rescue teams to rush to the site of an injured elephant. Donate today to help pay for the medicines, equipment, transportation costs, and for the rangers to stay out in the forest for days on end to monitor the recovering elephants. 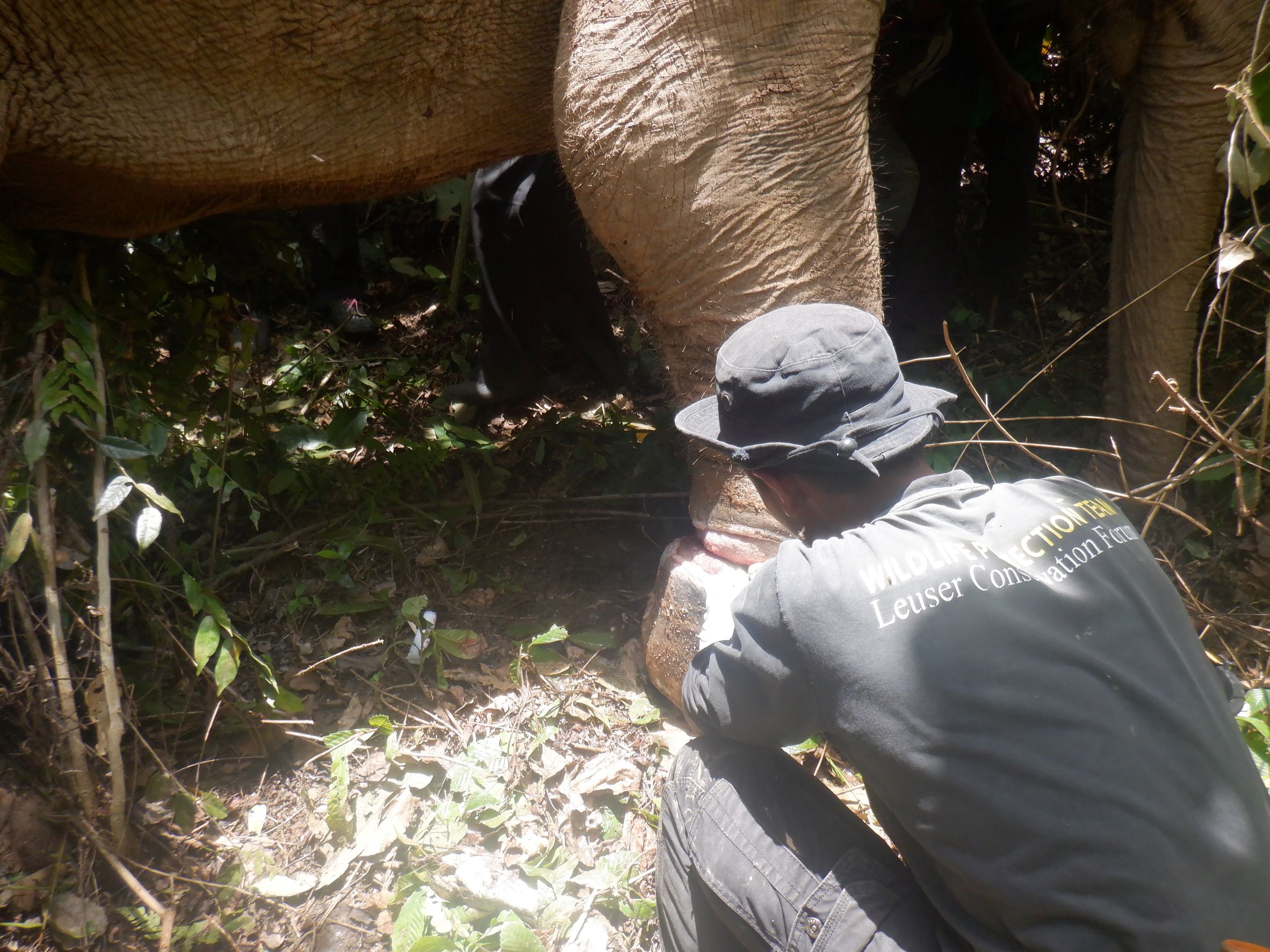 Sadly, sometimes there is nothing that can be done. In just the past year, at least two elephant calves have died with horrific snare injuries. Earlier this year, a very young female elephant died after she lost half her trunk in a snare. In the past month, FKL rangers found a dead calf in a river in the Leuser Ecosystem. The calf had a deep snare wound to her left front leg.

FKL and their rangers are up against huge obstacles to protect and save all elephants. Every elephant that dies is a significant loss to the species, and it’s especially tragic when female elephants die as they take all possibility of future calves with them. Although these two infant female elephants are gone forever, Senamo is still here. She’s still recovering and being cared for by our rangers, and she still needs your support, as do all the other Sumatran elephants who have escaped the snares so far. 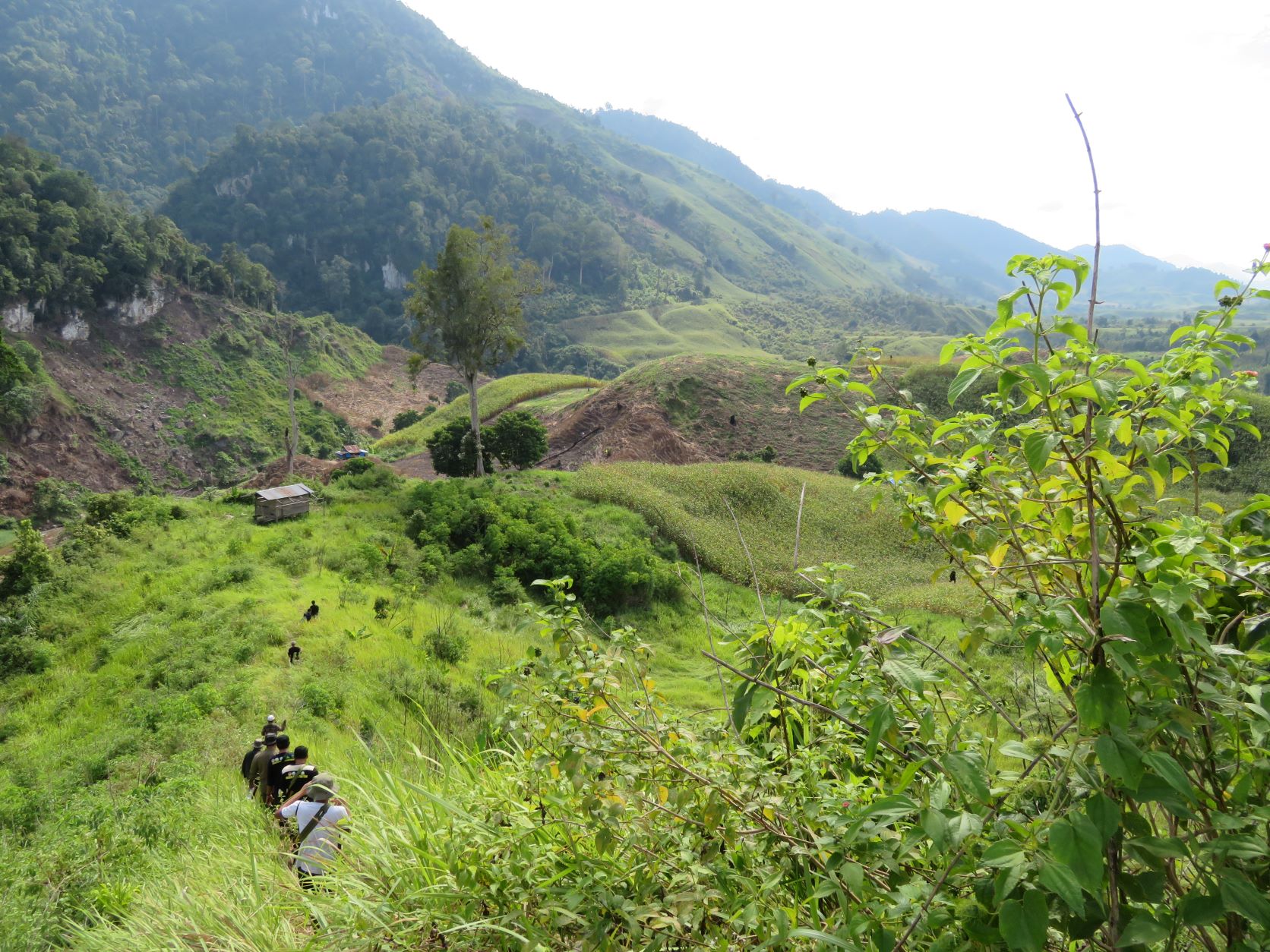 Your donations also pay for the teams to patrol the forest, looking for and dismantling snares, and taking poachers to court when they’re apprehended. The wildlife rangers have a huge job, and they can only protect the remaining Sumatran elephants with support from people like you. Will you stand on the frontline with our rangers and help protect elephants like Senamo from snares?